I’d like to start this week’s intro by saying I have the utmost respect for Mr. Fred Rogers. He brought a gentle, comforting presence into the lives of millions of children and the world is a better and happier place for him having lived in it.

When I was young, we used to watch the Dean Martin Show every week. My favorite episodes featured Jonathan Winters squeezing into a room stuffed with random items (not unlike my garage). He would pick up an item, such as a ball glove or carburetor, immediately jump into character, rattling off the funniest story you ever heard—totally spontaneous and unrehearsed.

Something similar, only different, happened to me today as I wrote this story. The Friday Flash Fictioneer photo for this week is courtesy of Doug “Flying Disc Man” MacIlroy. To read other far-fetched offerings visit our hostess, Ruby Slippers Wisoff-Fields’ blog, http://rochellewisofffields.wordpress.com/ and click on the little blue InLinz critter to find links other author’s blogs. 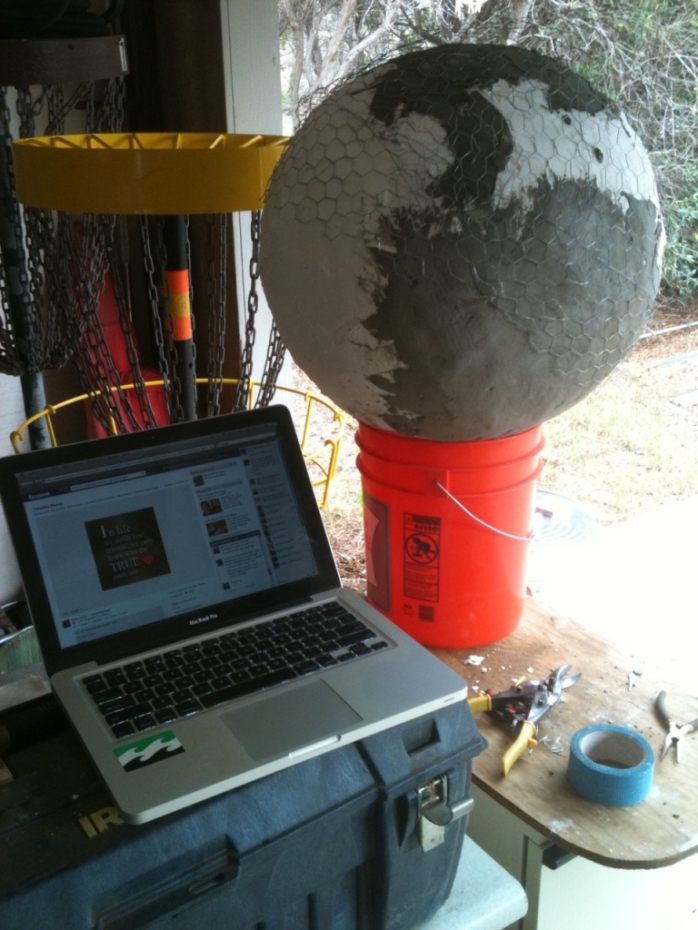 “Good morning, boys and girls. Welcome to Mr. Roger’s workshop. Today we’re going to build a disco ball for our friend, Mr. Mac, in Hawaii. Can you say that . . . disco?

First, we soak strips of paper in paste and cover a beach ball with them. This is called papier-mâché. When the ball is dry, we’ll glue on thousands of tiny mirrors.”

“He wants to put it on his red bucket and take it to the disc golf course.”

← Houston, We Have a Problem
Mayan Calendar Bucket List →

I don't write, I touch without touching.