I am among the few remaining sub-species of dinosaurs who still subscribe to a newspaper. A few years back, newspapers used to give their employees holidays off, but now, like everyone else, they call them “associates” or “team members” and force their noses to the grindstone 365 days a year. I could rant and rave about this from now until the Mayan calendar expires, but it still wouldn’t return us to those thrilling days of yesteryear, so I’ll just shut up and move on.

When I went out to the paper box yesterday morning (Thanksgiving Day), little did I know it was going to require a crane and forklift to remove it from the box and transport it into the house. The paper carrier must have forearms like Popeye the Sailor (or good medical insurance) to shove several hundred of those giant round-bales of print into tiny plastic boxes.

Yesterday’s edition consisted of 4 ½ ounces of news, sports, classifieds, etc., and 492 lbs. of advertisement. I’m sure millions of Americans spent yesterday morning devouring these ads like piranha in feeding frenzy, plotting their attacks against these poor retailers in their moment of vulnerability to snatch up bargains galore. After all, everyone is a sucker for a bargain—even the MC in today’s story. 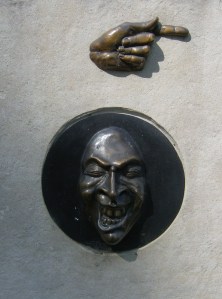 Jason had camped outside the big box store with hundreds of others. Moments before the doors opened, he surveyed the crowd for potential future victims. Teenagers, old folks, and minorities were all equally represented. He smiled.

The sale paper proclaimed “below cost” pricing on chainsaws, machetes, broadaxes, and even hockey masks—all the tools of his trade.

Once inside, he headed for the hardware section. Rounding a corner, a middle-aged woman slammed her cart into his. Another grabbed the last remaining chainsaw. Four more surrounded him, their eyes like flaming embers, growling, cursing, and gnashing their teeth.

Suddenly a warm, wet spot appeared on the front of his blue jeans, and for the first time in his life Jason fully understood the meaning of the word . . . terror.

← Not the Strongest Battery in the Bottle
Shamash; the Final Candle →