Today’s post is inspired by the weekly photo prompt—provided this week by Susie Lindau. Be sure and visit her web site  http://susielindau.com/ to enjoy her 100 word Flash Friday story. Read the comments and follow the links to other stories ranging from excellent to sublime.

The Adventures of Lard Boy
The main concourse appeared three stories above where he now stood. Droplets of sweat crawled behind his mask and stung his eyes. 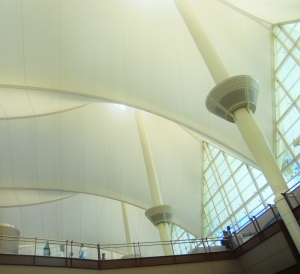 Time was running out.
Moments before, his arch enemy, Skinny Craig, had texted a photo of Donut, Lard Boy’s sidekick, bound and dangling above a boiling cauldron of decaffeinated coffee—devoid of cream and sugar.
He strained to catch his breath beneath a sweat-soaked cape.
Where was the elevator?
Visions of poor Donut, bobbing in scalding coffee seared his mind.
He would have to take the stairs.

Ravenous pangs gnawed at his stomach. “Better have a snack first.”

← Nuts about You
I Hear a Symphony →

THE EDITOR'S JOURNAL
Of magic and more
Renee Writes Here

It's okay if you fall down and lose your spark. Just make sure that when you get back up, you rise as the whole damn fire.